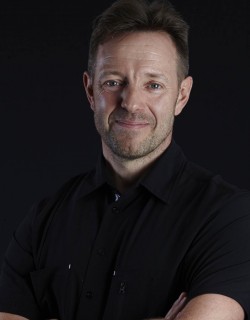 Simon Ward is the founder and co-owner of TheTriathlonCoach.com (with Jack Maitland)

He began the tri-coaching journey back in 1995 when personal training clients asked him to help them complete their first triathlon.

At the time there were very few triathlon coaches and no formal coach education programme in the UK.

As soon as the then BTA offered the L2 award (and subsequently L3) Simon applied, studied and qualified as one of the UK’s first L3 triathlon coaches.

Since that time he has gone on to become the leading tutor for British Triathlon, writing and delivering much of the current L3 course.

Of this he says “many of the L3 coaches in the UK today have been taught by me and I’m immensely proud to see some of them doing so well”.

Never one to rest on his laurels, Simon is constantly seeking to improve his understanding not just of triathlon but exceptional athletic performance.

“Most triathletes are good at training but sometimes this happens at the expense of a balanced lifestyle. My passion is helping age groupers to overcome the challenges of fitting their training (and recovery) into a busy life and yet still achieve their goals”

With a strong emphasis on working with athletes who have ambitions to complete an Ironman event, Simon has now helped over 300 people achieve this goal. Some are first timers who just want to beat the cut offs, but there are also those who seek to qualify for the ‘holy grail’ of Ironman performance - qualifying to race in the Hawaii Ironman World Championships. To do this he has has created a specific programme, "Qualify for Kona".

Despite his busy schedule, Simon is still competing as an age group athlete and regularly competes in 1-2 Ironman events each year

In 2017 he achieved his lifelong goal of racing at the Hawaii Ironman in Kailua Kona.

His current Iron distance total stands at 17 and includes iconic races such as The Norseman, Inferno, and Lanzarote. He’s also a 2 time finisher of the “Toughest Footrace on Earth” - The Marathon des Sables (for which he now coaches triathletes preparing for this event).

Limiting himself to no more than 20 athletes per year, spaces on Simon's athlete list are rare, maybe 1-2 per year.

If you would like to work with Simon and be considered for either the Ironman or Qualify For Kona programme please click on the button below and complete the questionnaire.

Bethany will then contact you to arrange the first interview. 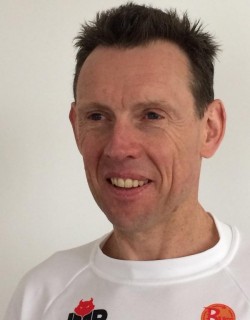 Has worked full-time as a triathlon coach since 2002

Jack was at the forefront of developing the Leeds Triathlon Centre since Simon and he started coaching the Northern World Class Talent Identification and Development programme in 2001. The centre is now one of the most successful triathlon programmes in the world with 15 professional athletes training full-time and a very strong student programme across Leeds Carnegie and the University of Leeds. Jack left his role with the centre in December 2017 and is expanding the number of TheTriathlonCoach.com athletes he coaches, while continuing to closely support some of the other TTC coaches in their professional development.

Some of the athletes Jack has coached:

Duncan and Claire Shea-Simonds – Age-group husband and wife, both qualified for Hawaii Ironman World Championships 2015 and 2017 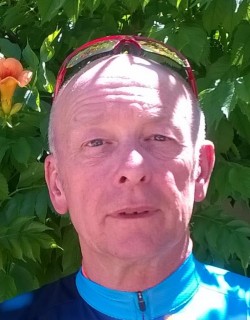 I started coaching back in 1986, middle/long distance runners, eventually coaching several to represent England at XC and 10km– half marathon. In the mid 90s I got the Triathlon bug and began working with Triathletes coaching two athletes one male, one female to become age-group World Champions in both Duathlon and Triathlon. Alongside this I set up and ran the following, working with several lottery funded triathletes.

During this period I won the British Triathlon Coach of the year in 2005. I also started working with TTC in 2005. In 2007 I became endurance coach to Olympic 800m runner Jenny Meadows. I qualified as a BTF level 3 senior coach back in 2003, and continue to practice and hone my craft to this day!

My coaching philosophy…. I am big on long term planning I prefer using the funnel/mixed periodisation approach for experienced athletes , a different approach for novice/intermediate triathletes, Understanding that one type of plan does not fit all, I try to quickly identify strengths and weakness, listen to your athletes, see how they respond to a variety of training stimulus, it helps form an endurance profile. Great feedback is essential, become a great listener! Sometimes good coaching is telling an athlete what not to do as opposed to what to do. Training wise - Start backwards and work the extremes, bring it all together, never leave any component of training behind, progress everything! Coaching is a blend of art and science! I am an avid reader on all things endurance! In general I follow the 80/20 rule, not the % of intensity levels, but 80% of athletes probably need better endurance, whilst 20% need better speed! 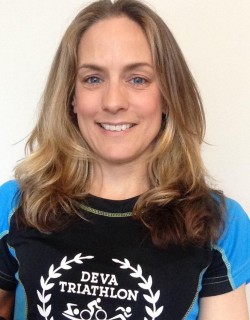 I started coaching triathlon in 2006 when my club called out for more coaches.  Having been coached myself most of my life through running and then also triathlon I felt I had a lot to give.  I then progressed my coaching to writing specific programmes for individuals and gained my level 3 coaching qualification in 2013.  I have experience of coaching distances from sprint up to Iron distance and abilities from novice to top end age group.

I believe in training the correct energy system with training specific to the race distance being targeted.  Coaching to me isn’t about how hard a session I can set for an athlete or doing as many hours per week training as possible, it’s about getting the balance right to achieve realistic goals.  The training I prescribe is individually tailored to each athlete and takes into account their work and family commitments and sets achievable training plans with long term goals in mind.

I come from a competitive running background where up until around age 20 I competed at track and cross country representing my county.  I then moved into triathlon and duathlon where I gained many podium finishes and raced for a French team for duathlon. I also represented GB at the World Triathlon Champs in 2007.  I now focus on running where I have a marathon pb of 2hr 45, half marathon pb of 77 mins and 10k pb of 35 mins.  A highlight for me was winning the Manchester Marathon in 2016.

I have recently become a mum and fully understand the trials of getting the balance right between being a mum, training and working! 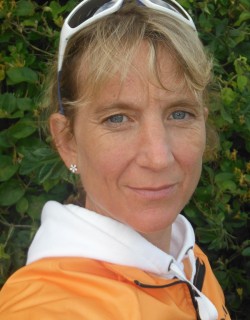 As a working mum and athlete, I understand the pressures and reality of everyday life, and so enjoy guiding athletes to achieve the goals and performances they are capable of.  My aim is to help athletes find a balance to be able get the most out of their training, being smart and realistic.

I still enjoy training and competing at all distances but particularly off road/adventure events. I represented GB in a number of World Age-Group Championships on road and off, and have competed nationally and internationally at events such as OtillO, The Inferno and XTri24.

My coaching philosophy looks at the bigger picture of what makes an athlete achieve their triathlon ambitions.

Programs and sessions are relatively straight forward these days, but just training hard is not enough. A more intelligent approach is needed to ensure you make it to your A race in top form.

Consistency, nutrition, recovery, and maybe a little sports psychology, all tailored to the goals of the athlete comes as part of the package when you’re being coached by me.

Triathlon is a very demanding sport, and can be a way of life, which is why a holistic view of training is needed. To do that a good coach needs to be an integral part of the athlete’s team. Working together we can be a strong and effective unit that makes the right choices. And there’s nothing I enjoy more than seeing my guys exceed their expectations and achieve great things…..

Running, mountain biking and swimming were a big part of my late teens and early twenties, but my first serious experience of competition happened as an aerial Snowboarder performing tricks for points. This was when I really started to shape my ideas of what it takes to make it as a competitive athlete.

Triathlon happened in my late twenties, and seemed like a natural sport for me having a swim, bike and run background. I raced at club level for many years, at all distances up to 70.3 Half Ironman.

Now in my forties long distance cycling internationally is my thing…..

Head Triathlon Coach at the University of Birmingham where she coaches and runs a club of 120 triathletes including a high performance squad of 12.

She has trained athletes at all distances as well as single discipline athletes competing in cycling and ultra running. 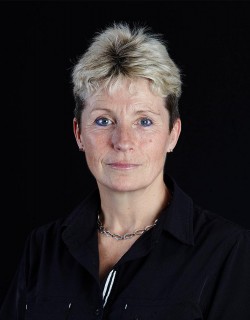 My coaching philosophy is to make triathlon fun and accessible.  I like to work closely with my athletes and tailor their goals and training around their busy lives to ensure a good balance between family, work, training, and rest.  Good communication and athlete specific training programmes are the keys to this.

Having worked full time while training as a triathlete and racing cyclist, I have a good understanding of the pressures of life, injuries, illness and whatever else life can throw at you.  It’s very important to me that athletes have fun and enjoy both training and racing, and that they understand the benefits of rest and recovery.

As an athlete I have been competing in triathlon on and off for about 30 years, and have also dabbled in adventure racing.  I was a racing cyclist in my twenties and early thirties.  Most of my triathlon racing has been at middle and long distance.  I have been very fortunate to have qualified and raced at the Ironman World Championships Hawaii, Ironman World 70.3 Championships in Florida, and ITU World Long Course Championships.  In more recent years I have ventured into other long distance events such as O till O, Marathon des Sables and other off road long distance triathlons and swim events.

I have been a professional level 3 triathlon coach for over twelve years.  Prior to this I spent many years as a club coach whilst I had a full time job.  As a triathlon coach I have worked with athletes of all ages and abilities. Most of my work is based around age group athletes competing at all distances.  As a long distance athlete I have a particular interest in this area.  I have also worked with paratriathletes, juniors, youths, as well as running training workshops and camps both in the UK and abroad.

More recently I have been involved with Go Tri and Go Tri Adult Social Care.  Go Tri Adult Social Care has brought people with minor and major learning disabilities and people with mental health problems into triathlon with great success.  I currently coach at Leeds Beckett University where I have a swim squad.  I also coach at The Leeds Triathlon High Performance Centre. 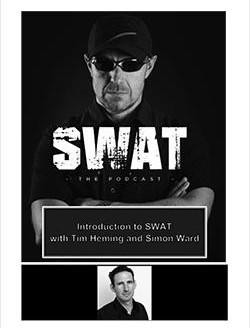